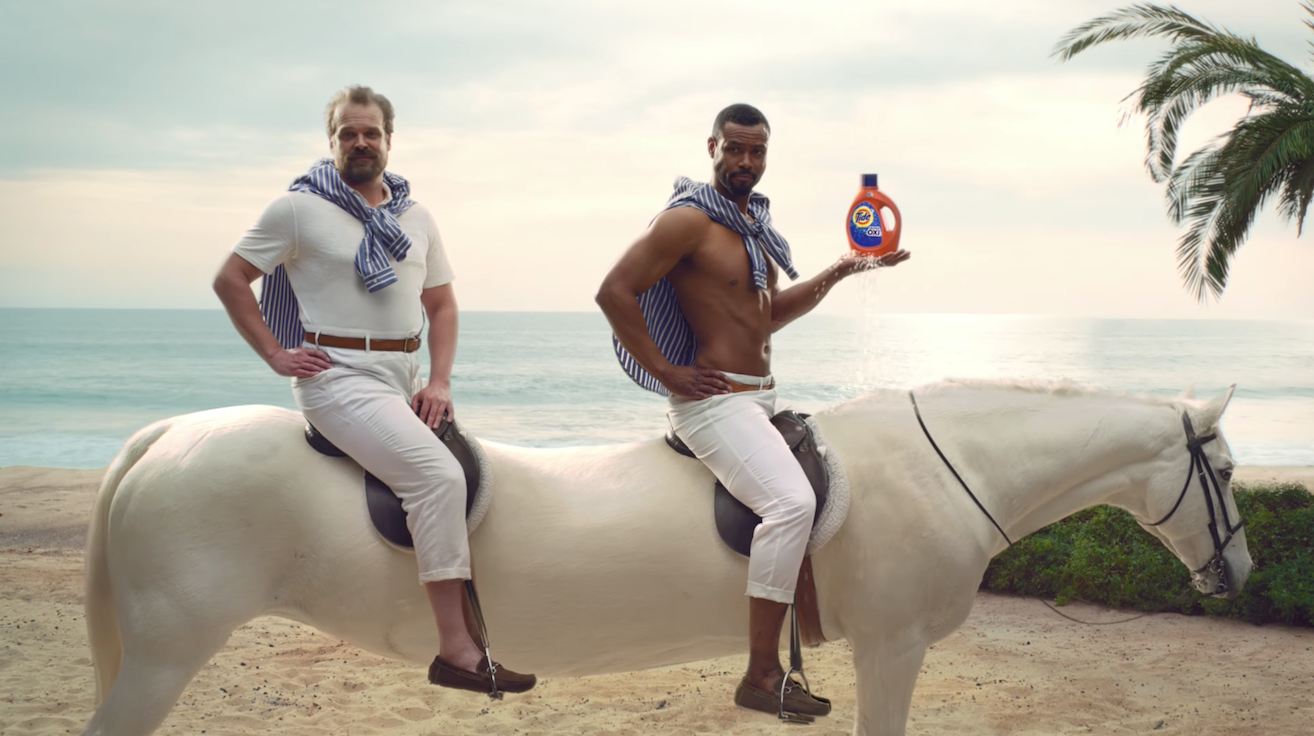 Updated 2/5/18 at 8:40am. Not only am I a digital marketer, I’m a huge sports fan and the Super Bowl is the perfect confluence for both of these passions. I was planning about writing my favorite spots tomorrow, but since the Tide Super Bowl commercials were killing it and I didn’t have a dog in this fight (go Cowboys!) I had to write about the advertising history I was witnessing in the moment.

Kicking off the Super Bowl: Everything’s a Tide Ad

I’ve seen a lot of creative advertising, but I’ve never seen a cohesive strategy that Tide rolled out in “It’s a Tide Ad.” According to Adweek, the ad was from Saatchi & Saatchi New York and initially started as kind of a meta-commercial asking if everything/every commercial is actually a Tide ad. It was supremely clever spot that featured David Harbour and his distinctive baritone voice (who has instant geek cred from Stranger things), playing on the common car, beer and jewelry tropes that all turned out to be Tide ads. Why? Because the clothes are clean naturally.

As Harbour asks at the end of the spot, “So does this make every Super Bowl ad a Tide ad? I think it does, watch and see.” Initially, I thought of this as simply a clever way to make us think of every commercial as a Tide advertisement. Something kind of along the line of The Game, a classic mind game that everyone is playing (even if you don’t know about it).

In an interview on Adweek, Harbour said that it was fun to play the part in so many different kinds of commercial styles. “I think that’s hilarious, just the fact that you have this character who’s sort of this Rod Serling of the Twilight Zone of advertising, coming in and being like, ‘Wow, maybe every ad is like a Tide ad!'” Harbour said. He later compared his character to a sort of Greek God who “comes down and plays with the mortals and then goes back to his castle and talks about what they’re doing.”

This alone would have made it an iconic commercial. But it’s what they did next that pushed it over the line of greatness.

Anyone who is a digital first marketing geek loved the classic Old Spice commercials featuring Isaiah Mustafa. You know, those silly commercials where the guy is in a bathroom, the boat and then on a horse all in the span of 30 seconds.

It was at this time that I kind of saw what was going to go down:

I kind of see what’s about to go down here! Love you @tide! #superbowl

The campaign then turned truly integrated after halftime as they started hacking the actual broadcast. Any football fan knows all the quick hit, 3-5 second brand logo spots when you come back to the game. You know, the official voice over of “Tonight’s game was brought to you by Papa John’s. Better ingredients. Better pizza. Papa John’s.”

But, there are also the occasional spots that pick up after a commercial that features players side-by-side and some stats that the announcers cover before returning to the game. These are a quick hit that have nothing to do with brands and everything to do with providing fans info on the game before returning to it. Tide decided to hijack this moment by spoofing the look-and-feel of a very non-ad but turning it into an ad. This was subtly brilliant.

I didn’t think it would wind up on YouTube as a commercial so I screen grabbed it here (note: the audio is awful):

Tide ended up having another moment where they actually appeared in one of those string of sponsors and the announcer said, “This game was brought to you by Tide, and Tide, and Tide, and Tide and Tide.” This further made the impact on the viewer that *all* the ads they were watching were actually Tide ads.

Third Quarter: Nothing’s Sacred, Not Even the Clydesdales

But they weren’t done and they proved that nothing was sacred. Tide aired a 15 second ad in the third quarter that opened with a Clydesdale prancing around. Everyone was ready for Anheuser Busch to pull on our heartstrings when we heard, “Beautiful.” But the moment was hijacked when it was followed up with, “Like a Tide commercial.” What’s amazing is that Budweiser actually had a spot in that commercial break! Tide totally prevented their message from landing.

The “Tidesdale” spoof was followed up with that classic Mr. Clean dancing while the housewife is watching him shake it. Her moment is interrupted when Harbour tells her, “Sara, it’s a Tide ad.” You gotta see it:

Fourth Quarter: Side Effects May Include

The Tide Super Bowl Commercial run concluded with a fourth quarter pharmaceutical spoof. By now, you kind of knew what was coming, but it was still great. I loved the serious, “Whenever you see clothes this clean, that’s a Tide ad,” followed by all the side effects.

Mean Joe Green. 1984. Budweiser Frogs. Tide has now joined the pantheon of greatness. But what’s impressive is that they did it more as a cohesive campaign rather than a solitary commercial. In the coming weeks and months, I think we’ll see more of “It’s a Tide ad” on digital and social channels—it just smacks of something that’s going to do well in different channels.

But more importantly, the “tide” is turning on what it means to have a Super Bowl commercial. Obviously there’s been a shift to have a more omnichannel approach, but I thought this year’s ads pushed the envelope forward. Notably, I think that the Doritos #SPITFIRE/Mountain Dew #ICECOLD commercials were solid along with the voting campaign on Twitter.

I'm all about Doritos #SPITFIRE 🔥🔥🔥Which team are you on? https://t.co/GwiN4nUDPr

Bud Light’s “Dilly Dilly” commercial didn’t live up to the hype that I put on it, but I thought that their promoted tweet was pretty good:

Our savior is coming! Dilly Dilly!

However, Tide was the belle of the ball by a long shot. The Super Bowl is the place to push the envelope, but that has rapidly extended to the online space as well.  What do you think? What was your favorite commercial from the Super Bowl this year?